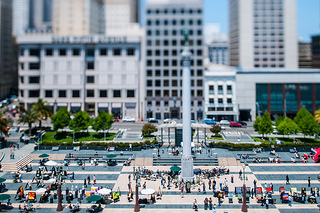 San Francisco’s Union Square, ranked as one of the city’s most walkable neighborhoods.

Living in a highly walkable neighborhood is more important to millennials than it is to other generations, as nearly one-third of them use their feet as a regular form of transportation.

In a recent survey conducted in conjunction with Portland State University, the National Association of Realtors found that 50 percent of millennials – defined here as persons born in 1981 and later – said that living within an easy walk of amenities was very important when choosing a place to live. The importance of walkability decreases with age: 43 percent of Gen Xers ranked it as critical, compared with 38 percent of baby boomers.

One reason that a neighborhood’s walkability is so important to millennials is because a significant number of them – 32 percent – reported walking to work or school within the past month, compared with 19 percent of Gen Xers and 13 percent of baby boomers. Millennials were also the most likely to stroll in their free time, with 62 percent saying that they walked to restaurants and shops and when running personal errands. Additionally, the survey found that millennials walked an average of 13.3 days per month, more than older generations.

Members of Generation X were slightly more prone to travel by bicycle: 28 percent reported having ridden a bike for transportation or exercise in the past 30 days compared with 26 percent of millennials and 21 percent of baby boomers. Gen Xers favored neighborhoods with bike lanes more than other generations, with 28 percent calling them very important.

Millennials are flocking to the Bay Area to take advantage of a booming economy and high-paying jobs, and the fact that the region’s major cities are some of the most walkable in the U.S. is likely an additional attraction. In its 2015 rankings of America’s most walkable cities, Walk Score named San Francisco as the second most walkable city in the country, with a score of 83.9 out of a possible 100. Chinatown ranked as the city’s most walkable neighborhood, with a perfect score, while four other enclaves received a 99.

Oakland ranked No. 9 in the country for walkability, notching a 68.5. Downtown tied Koreatown-Northgate as the most walkable neighborhood in the city, both scoring a 97.

Walk Score also ranks neighborhoods for their bike-friendliness based on four factors, including number of bike lanes and hills. Even with its famously steep terrain, San Francisco ranks No. 2 in the country for bike-friendliness with a score of 75.1. Perhaps not surprisingly, San Francisco’s best neighborhoods for bicyclists are all in relatively flat parts of the city, including the Civic Center and the Mission District, both of which received a score of 98.

With a Bike Score of 60.9, Oakland ranks No. 14 in the U.S. for bicyclists, with the Bushrod neighborhood in the northern part of the city netting a high score of 98. Nearby Berkeley actually has a higher overall Bike Score – 88.8 – than either of its larger neighbors but didn’t make the top 20 due to its size.