The luxury home segment in San Francisco makes up about 10% of the overall home market in the city (by unit sales; more by dollar volume). One of the most interesting dynamics playing out right now in the SF luxury home market is the large increase of high-tech industry buyers with huge sums of new money at their disposal. Their presence is strongly impacting the market, especially in certain neighborhoods they’ve deemed most appealing for a variety of reasons. We expect this influx of new wealthy buyers to continue throughout 2012 as further IPOs occur in the Bay Area.

This statistic is one of the clearest expressions of buyer demand vs. inventory of luxury homes for sale. Three of the last 4 quarters rank as the highest percentages since the peak of the market in 2007-2008. The decline in the 3rd quarter of 2011 was probably due to the heightened sense of crisis over the summer regarding the national debt limit increase and the Euro Zone debt crisis — both of these bringing up fears of national defaults. Typically, we’ve found that the wealthiest are those most psychologically sensitive to these financial-markets events. 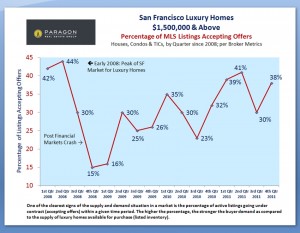 Look how demand in the SF luxury home market blasted off in the beginning of 2012. 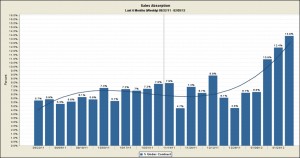 Most of the luxury homes that do sell, sell quickly at very close to asking price. Those going through price reductions spend a much longer time on market and sell at an average discount of 18% off original list price. And many listings still expire without selling, usually because the market deems them overpriced. 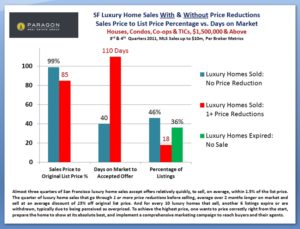 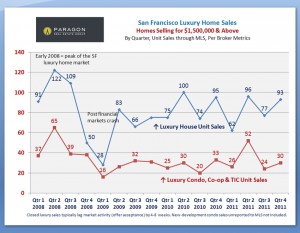 Dollar per square foot values, even in the high-end, vary widely from neighborhood to neighborhood. The absolute highest are typically paid for luxury condos in prestige buildings with staggering views. Remember that short-term fluctuations are relatively meaningless — they occur naturally since the “basket” of homes sold varies from month to month, quarter to quarter. In 2011, one Pacific Heights mansion sold for $29.5 million at almost $3000 per square foot, but that must be considered an “outlier” even for prestige luxury homes. 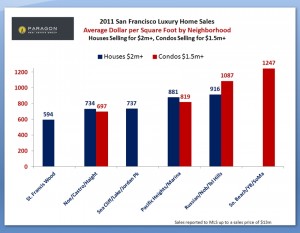 Sometimes it’s useful to take a step back and look at longer term trends. These charts delineate average sales price (which is different from median sales price) and average dollar per square foot by neighborhood, by year, going back to 1995. Annual statistics are typically more reliable and meaningful than quarterly or monthly stats, because the body of data is so much larger and the normal fluctuations of smaller time periods get flattened out. Even then, some of these neighborhoods do not have that many sales and of the sales, many do not report square footage — thus these statistics must be considered generalities with a fairly large margin of error. 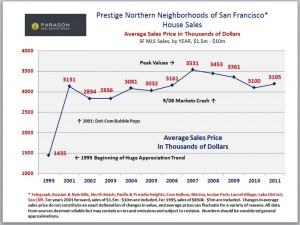 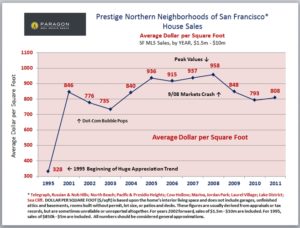 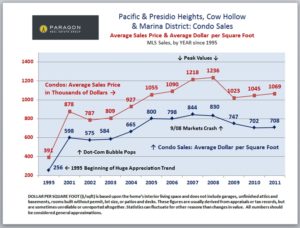 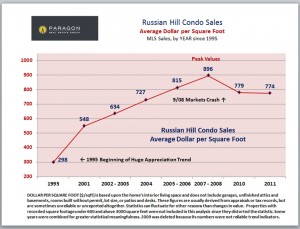 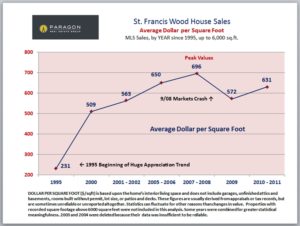 The older prestige neighborhoods running across the north of the city from Sea Cliff through Pacific Heights to Russian & Telegraph Hills still dominate sales, but high-end sales in the greater Noe Valley/ Castro/ Haight Ashbury district have soared since the late nineties, and luxury condos in new developments in South Beach, SOMA and Yerba Buena are also a major part of this market now. St. Francis Woods has been an enclave for sales of big houses for quite some time. 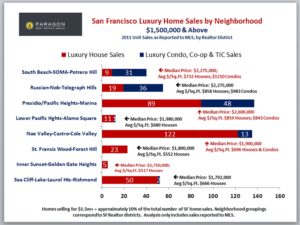 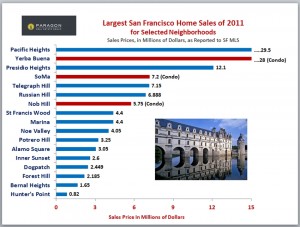 Inventory declines rapidly as the holiday season begins. The high-end market usually, to a large degree, hibernates between Thanksgiving and mid-January and then starts to pick up again. 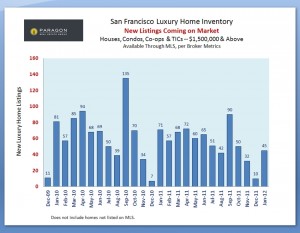 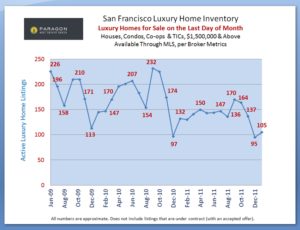 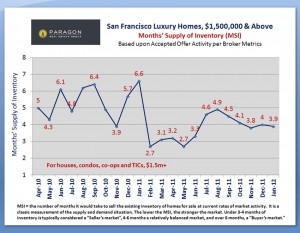 MEDIAN SALES PRICE is that price at which half the sales occur for more and half for less. It can be, and often is, affected by other factors besides changes in market values, such as short-term or seasonal changes in inventory or buying trends. Though often quoted in the media as such, the median sales price is NOT like the price for a share of stock, i.e. a definitive reflection of value and changes in value, and monthly fluctuations are generally meaningless. If market values are truly changing, the median price will consistently rise or sink over a longer term than just 2 or 3 months, and also be supported by other supply and demand statistical trends.

AVERAGE SALES PRICE is calculated by adding up all the sales prices and dividing by the number of sales. It is different from median sales price, but like medians, averages can be affected by other factors besides changes in value. For example, averages may be distorted by a few sales that are abnormally high or low, especially when the number of sales is low.

DAYS ON MARKET (DOM) are the number of days between a listing going on market and accepting an offer. The lower the average days on market figure, typically the stronger the buyer demand and the hotter the market.

MONTHS SUPPLY OF INVENTORY (MSI) reflects the number of months it would take to sell the existing inventory of homes for sale at current market conditions. The lower the MSI, the stronger the demand as compared to the supply and the hotter the market. Typically, below 3-4 months of inventory is considered a “Seller’s market”, 4-6 months a relatively balanced market, and 7 months and above, a “Buyer’s market.”

DOLLAR PER SQUARE FOOT ($/sqft) is based upon the home’s interior living space and does not include garages, unfinished attics and basements, rooms built without permit, lot size, or patios and decks — though all these can still add value to a home. These figures are usually derived from appraisals or tax records, but are sometimes unreliable or unreported altogether. All things being equal, a house will sell for a higher dollar per square foot than a condo (due to land value), a condo higher than a TIC (quality of title), and a TIC higher than a multi-unit building (quality of use). Everything being equal, a smaller home will sell for a higher $/sqft than a larger one. (However, things are rarely equal in real estate.) There are often surprisingly wide variations of value within neighborhoods and averages may be distorted by one or two sales substantially higher or lower than the norm, especially when the total number of sales is small. Location, condition, amenities, parking, views, lot size & outdoor space all affect $/sqft home values. Typically, the highest dollar per square foot figures in San Francisco are achieved by penthouse condos with utterly spectacular views in prestige buildings.

Median and average statistics are generalities subject to fluctuation due to a variety of reasons (besides changes in value): how they apply to any specific property is unknown. Averages may be distorted by one or two sales substantially higher or lower than the norm, especially when sample size is small. Sales not reported to MLS – such as many new-development condo sales — are not included in this analysis. All figures should be considered approximate and are derived from sources deemed reliable, but may contain errors and omissions, and not warranted. We are happy to provide or direct you to the original data upon which each chart is based.