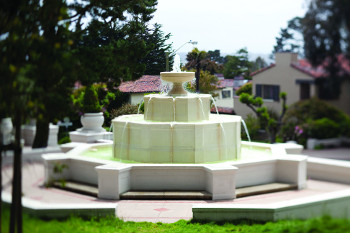 One of the two fountains in San Francisco’s St. Francis Wood neighborhood.

With its expansive, stately homes and impressive architectural pedigree, San Francisco’s high-end St. Francis Wood stands out as a particularly beautiful neighborhood — even in a city that has plenty of them.

Located in the city’s southwestern portion, the neighborhood was developed a few years after the 1906 earthquake as a “residential park” or “garden suburb” and is an example of the City Beautiful movement of the early 20th century. The exclusively residential neighborhood has a curvilinear street plan designed by noted landscape architects The Olmsted Firm. John Galen Howard, who spearheaded the design of the University of California, Berkeley campus, added other classical touches to the neighborhood, including its entryway pillars, main gates, and one of its two fountains.

St. Francis Wood homes are mostly spacious and grand and reflect a range of architecture styles, including Tudor, Italian Renaissance, and Colonial. Some residences were designed by prominent Bay Area architects such as Bernard Maybeck and Julia Morgan. Large lots with well-manicured yards are typical in the neighborhood, and power lines are buried underground.

While St. Francis Wood feels a world apart from the city, urban amenities are very close. Two major Muni light-rail trains, K-Ingleside and M-Ocean View, run along the neighborhood’s western edge and provide service to downtown areas, while bus line 23-Monterey offers service to the Glen Park BART station to the east and the Pacific Ocean to the west.

Though St. Francis Wood prohibits businesses within its borders, residents are a short stroll away from the West Portal business district, home to a number of restaurants and shops. Stonestown Galleria, which has more than 150 stores (including a Trader Joe’s supermarket), is about a mile south of the neighborhood.

St. Francis Wood is within close proximity to several spots for outdoor recreation, including 938-foot tall Mount Davidson, the highest point in San Francisco. Also nearby is Pine Lake Park and Sigmund Stern Redwood Grove — the latter of which hosts free concerts on Sundays from June to August.

Some of San Francisco’s wealthiest homebuyers have historically been attracted to St. Francis Wood, and that’s still true today. According to MLS data, the median sales price for a single-family home in the neighborhood averaged $2.66 million between April 2014 and April 2015 — more than double the citywide average median sales price of $1.12 million. As in other highly desirable San Francisco neighborhoods, buyers are paying premiums in order to secure a home in St. Francis Wood; over the past year, sellers in the neighborhood received an average of 11 percent more than original price.