It’s safe to say that Mission Bay is San Francisco’s fastest-growing neighborhood. Empty Southern Pacific Railroad yards only 15 years ago, the district is now home to some of San Francisco’s finest apartment and condominium complexes, with more going up seemingly every day. Want to see the future of Mission Bay? Stand at the corner of Third Street and Mission Bay Boulevard and look back toward downtown. You’ll see no fewer than four cranes busy at work, lifting girders and beams into place on what will soon be two new mid-rise apartment complexes, Venue and MB 360. Google Maps still shows the two-block stretch of Fourth Street between Channel and China Basin as an unbroken string of parking lots; they need to catch up.

The neighborhood genesis is simple: once part of San Francisco Bay, Mission Bay was created over a period of time ending in 1910 when land excavated from other parts of the city – notably Rincon Hill – was dumped into the bay. The new real estate transformed a rough-and-tumble waterfront into a patchwork of utilitarian railroad yards and stayed that way for almost a century, until 1998, when Mission Bay was targeted for redevelopment by the City of San Francisco. Catellus, a real estate firm created when Southern Pacific merged with the Santa Fe Railroad, was charged with the job of creating the new neighborhood.

In 2003, Mission Bay’s first major commercial development, the 43-acre USCF Mission Bay Campus, was completed. Since then, Mission Bay has become a magnet for healthcare, pharmaceutical and biotechnology business, attracting the likes of Bayer, Nektar and Fibrogen. Residential development followed UCSF to the neighborhood, beginning on a corridor of Berry Street, across Mission Creek from the heart of Mission Bay. It has since spread throughout the area.

It’s not easy creating a neighborhood out of nothing but it is easy to see why Mission Bay was chosen for that task. Centrally located and within easy walking distance of downtown and AT & T Park, it offers easy access to Caltrain, MUNI and Highway 280, stellar new housing, great bay and city views and a long stretch of waterfront.

Its developers have anticipated residents’ tastes and needs by attracting a diverse group of restaurants and night spots – nearby King Street is lined with new businesses, restaurants like Umami Burger, Nama, a branch of Amici’s Pizza and, at the ballpark, the Public House and Momo’s – including a neo-classic bowling alley/night club, Lucky Strike Bowl. King Street is also where residents can go for everyday services like Safeway and Walgreens, maybe stopping on their way home at the city’s newest library branch (opened in 2006), at 960 Fourth Street. 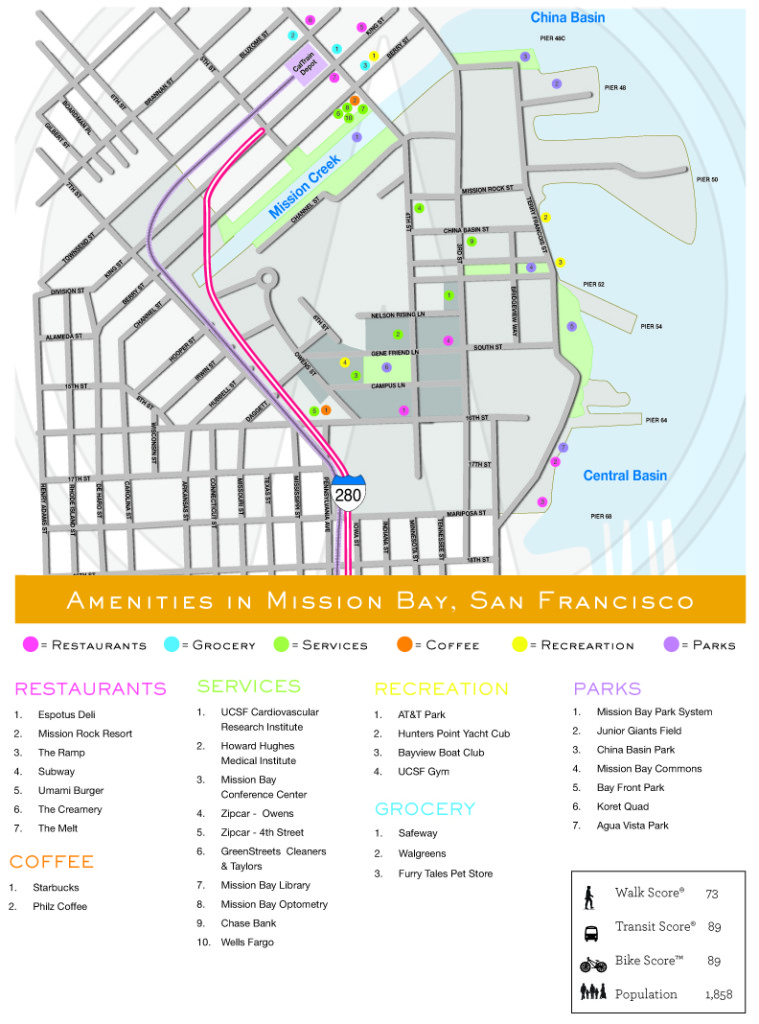 Mission Bay has multiple parks, including the promenade behind AT & T Park and UCSF’s central Koret Quad, a large green space featuring multiple outdoor art installations. A section of the 500-mile San Francisco Bay Trail runs along the Mission Bay waterfront. Mission Creek, a venerable waterway at the western edge of the neighborhood, features green space and public walking paths on both shores.

Mission Creek is also where you’ll find evidence of Mission Bay’s funkier days. A group of 20 or so houseboats – “floating homes” – has been bobbing up and down on the creek since the early 1970s, a small anachronistic outlier surrounded by progress and growth of a distinctly 21st-century fashion.

Maybe Mission Creek’s funky houseboat settlement isn’t too much of an outlier, though. All along Terry Francois Boulevard, at Mission Bay’s eastern border, are reminders of a different time and place – weatherbeaten maritime buildings, no-nonsense working piers, ships in the Pier 54 dry dock and a bit of local color, the Bay View Boat Club. Home to an annual “Plastic Regatta,” the club’s modest yellow clubhouse was towed from Hunters Point to its present site at 489 Terry Francois Boulevard in 1962.

There it stays, in the shadow of the shiny new headquarters of clothier Old Navy, a fun reminder that even in San Francisco’s most dynamically changing, newest neighborhood, a little bit of the old city shines through.