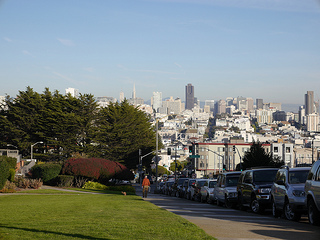 San Francisco home shoppers in search of a walkable neighborhood that blends both suburban and urban appeal should put centrally located Laurel Heights on their list of places to explore.

Situated in north central San Francisco, Laurel Heights is bounded by California Street to the north, Masonic Avenue to the east, Turk Street to the south, and Arguello Boulevard to the west. Also known as Jordan Park, the neighborhood is home to a portion of the University of San Francisco campus.

Laurel Heights is bordered by two business districts, giving residents access to dozens of shops and restaurants within a short walk. Walk Score, an online service that ranks neighborhoods based on amenities within walking distance, gives the neighborhood a score of 92 out of a possible 100, which the company deems a “Walker’s Paradise.”

Located on California Street, the charming, compact Laurel Village Shopping Center is home to nearly 20 businesses, including restaurants, specialty shops, markets, and banks. A number of other restaurants, taverns, and businesses line Geary Boulevard a few blocks to the south and Clement Street to the west. Additionally, the neighborhood is within walking distance of a Trader Joe’s grocery store and chain retailers Target and Best Buy.

Laurel Heights is also a quick stroll or bike ride from the Presidio and Golden Gate Park, both of which offer numerous family-friendly activities, including the California Academy of Sciences, The Walt Disney Family Museum, and the Presidio Bowling Center. Families will also appreciate smaller neighborhood parks Laurel Hill Playground and Angelo J. Rossi Playground, the latter of which has tennis courts, baseball fields, and an indoor swimming pool that’s popular with local children.

Aside from its two main commercial corridors and areas surrounding the university, most streets in Laurel Heights have a serene feel that’s far removed from the hustle and bustle of the city. Properties range from spacious single-family homes built in the early 20th century to modern condominium buildings constructed less than a decade ago..