San Francisco’s famous fog traditionally brings chilly temperatures to the city during the summer months, but the real estate market was caught in a heat wave in July. Ditto for real estate all over California, where more than half of the nation’s hottest housing markets are located. 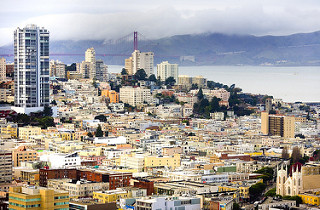 In its newest monthly report, Realtor.com ranks the 20 hottest U.S. real estate markets based on buyer demand – here meaning listing views – and fewest days on market. In a statement accompanying the report, Realtor.com Chief Economist Jonathan Smoke said that buyer demand is so intense in these markets that listings often receive up to three times as many page views as the national average.

As in June, San Francisco ranked as the hottest housing market in the U.S., with the average home taking just 30 days to sell. Realtor.com classifies the cities of Oakland and Hayward as part of San Francisco, underscoring the point that homes in the East Bay are also in high demand as escalating prices push more buyers out of the city.

Across the U.S., homes sold in an average of 69 days in July, down 7 percent from one year ago but up 5 percent from June. Smoke said that while demand for homes remains strong as summer peaks, the slowing pace of sales indicates that market conditions are becoming more balanced, which points to more moderate price growth this fall.