The Bay Area’s excellent job market and high wages, pleasant climate, and natural splendor are attracting plenty of new residents from all over the globe, and here’s another feather in our cap: San Francisco homeowners enjoy the highest quality of life in the U.S. 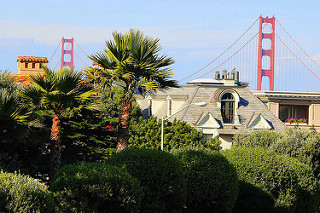 In its inaugural Home Happiness Index survey, HomeAdvisor ranks all 50 states and 36 major metro areas based on homeowners’ level of contentedness. The analysis found that happiness is less about the physical property and more about an area’s accessibility and community, though the actual home itself certainly plays a role.

“A homeowner’s quality of life is more likely to be dependent on their community and access to important attractions and services than it is on the number of bedrooms and bathrooms in their home,” Dr. Karen Ruskin, HomeAdvisor’s happiness expert and a tenured psychotherapist said in a statement accompanying the results. “Our research shows that homeowners are happiest in urban cities with good weather, an active culture, arts scene and higher income levels.”

California homeowners count themselves as the nation’s happiest, with nearly eight of 10 saying the state is the top place to live. About three-quarters of respondents said their home inspires pride and that they plan to stay in their community for the next five years. Two-thirds of Californians report feeling safe and secure in their communities, and a near equal number say they like and trust their neighbors.

Eighty-five percent of Golden State residents polled live near within an hour of a major metro area, and 59 percent live near a body of water. Sixty-two percent report having a reasonable commute, with an average time of 40 minutes.

The average California home is 29 years old and sells for $410,000, with 41 percent of respondents classifying the cost of living as acceptable. More than eight in 10 owners have renovated their home, and two-thirds are satisfied with its layout.

On a more local level, San Francisco claims the nation’s happiest homeowners, with an A-plus rating and more than eight in 10 calling it the best place to live. Seventy-three percent of residents take pride in their home, and nearly 80 percent plan to stick around for five years. About two-thirds of respondents rank the region high for safety, and 70 percent trust their neighbors. (Only about half have neighbors they actually like, however.)

Nearly half of San Francisco area residents live near where they work, 58 percent have a decent commute, and 83 percent can easily get to a freeway. Despite many longtime residents decrying current Bay Area traffic conditions as worse than ever, survey respondents reported commute times of 40 minutes, perhaps in part thanks to our region’s reliable and extensive public-transportation options.

The average home in the San Francisco metro area costs $1,200,000, with 37 percent of owners deeming the cost of living as reasonable. Homes in the region are 42 years old on average, and 77 percent have been renovated. Sixty-seven percent of those polled like their home’s size and layout.

When it comes to homeowner happiness, it appears that the west truly is the best. Four of HomeAdvisor’s top five happy cities are located in the west, rounded out by Los Angeles (No. 2), Denver (No. 3), and Seattle (No. 5). Eight of the 10 happiest states for homeowners are in the west, including Alaska and Hawaii.