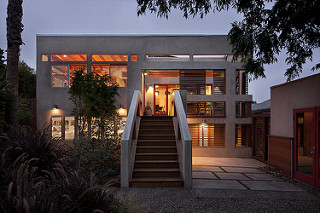 High prices, a shortage of homes for sale, and a state tax regulation are prompting some California and Bay Area owners to undertake big-money renovations in order to realize the home of their dreams.

The Wall Street Journal reports on several such jobs here in the Bay Area, including a Mountain View couple who could afford only a handful of homes on their $2 million budget in a fiercely competitive market. After purchasing a relatively pedestrian-looking Tudor for about $1.6 million, the homeowners spent an additional $600,000 to give it a sleek facelift using steel, stucco, and stone. One local real estate professional told the publication that the home would now sell for $3 million.

Proposition 13, the California law that reassesses property taxes when a home is sold, can mean big bill increases for buyers given the state’s big price tags, leading some owners to stay put and reimagine their homes. The article tells the story of a San Francisco couple who transformed their plain-Jane bungalow into an eye-catching modern abode. Although the property could fetch up to $2.25 million in the current market, the owner told the Journal that he had no plans to sell.

NEARLY HALF OF BAY AREA HOMEOWNERS ARE EQUITY-RICH
Homeowners in the Bay Area’s two largest cities are the nation’s most equity-rich, and our region also has the smallest share of seriously underwater properties.

That’s according to RealtyTrac’s Q1 2016 U.S. Home Equity and Underwater Report, which found that 12 percent of U.S. properties with a mortgage were seriously underwater at the end of the first quarter. Just 1.8 percent of homes in the San Jose metro area were classified as seriously underwater, the lowest in the nation, followed by San Francisco at 3.8 percent.

QUICK TURNAROUND TIMES FOR SILICON VALLEY HOME FLIPPERS
High demand for Silicon Valley real estate means that the savviest flippers could get a six-figure payday in less than four months.

A recent CoreLogic blog post puts the San Jose metro area among the top 20 in the U.S. for share of homes flipped in the first quarter, representing 5.45 percent of transactions. Silicon Valley home flippers took an average of 114 days to complete the cycle, second only to Memphis for quickest turnaround time.

Flippers in San Jose pulled in an average of $124,000 on their investments, more than anywhere else in the U.S. But because the barrier to entry is so high, their actual median gross profit margin was the lowest on the list, at 20.2 percent.

“The Fed’s decision to stand pat followed by a week of assorted unsettling news drove Treasury yields lower,” Freddie Mac Chief Economist Sean Becketti said in a statement accompany the numbers. “Since the start of February, mortgage rates have varied within a narrow range providing an extended period for house hunters to take advantage of historically low rates.”