A recent article in The Wall Street Journal on sales of ping-pong tables to tech companies hinted that slower sales are due to troubles in the Bay Area’s high-tech sector. Admittedly, it is an interesting approach to assessing the economy, but while everyone is looking for the slightest signs of what’s on the horizon, ping-pong tables are hardly a reliable indicator. There are many possible reasons for slowing ping-pong table sales, including that it is a durable item that is rarely replaced.

Nevertheless, there are more reliable indicators on which we should gauge VC activity and how it will impact the Bay Area’s tech employment and housing markets. For example, the quarterly Silicon Valley Venture Capital Confidence Index (Figure 1) measures and reports the sentiment of 30 professional venture capitalists on the funding environment in the Bay Area over the next six to 18 months. The index reached 3.59 on a 5-point scale (with 5 equaling high confidence and 1 equaling low confidence) in the first quarter of 2016, up from 3.39 in the previous quarter. The index increased at the end of 2015 following three quarters of declines, suggesting that optimism is rising among venture capitalists. 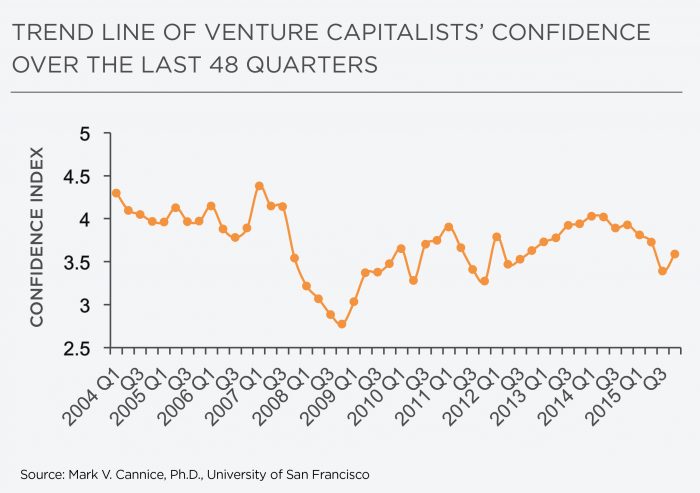 Still, with no technology IPOs in Q1 2016 and a drop from 35 overall IPOs in Q4 2015 to 10 IPOs in Q1 2016, — along with lower valuations of some unicorns — a lot of conversations have been brewing about slowing VC activity. Numbers pertaining to deals and investments have been particularly alarming. After promising to be the best year since the dot-com collapse, the last quarter of 2015 was characterized by a notable drop in VC activity, which bled into the first quarter of 2016. The deal count for both quarters remained at the lowest level seen in over three years. Figure 2 highlights California’s VC-backed investment activity in the first quarter and where the top deals happened. 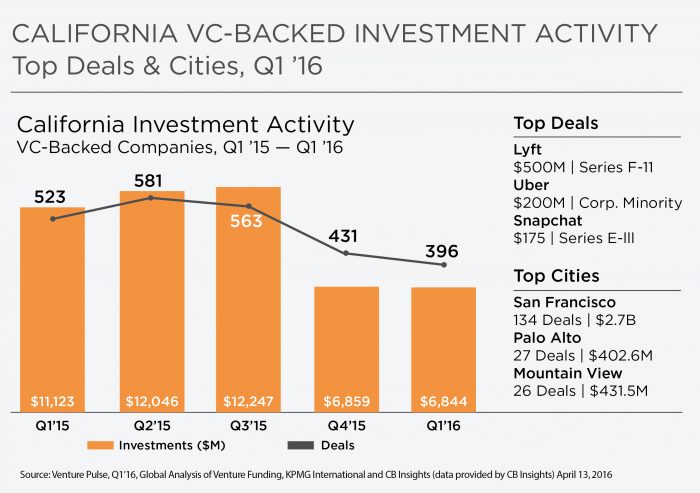 At the same time, VC firms raised $13 billion during the first quarter of 2016, which is the largest total since the dot-com boom in 2000. Robust growth in fundraising is not surprising given the amount of liquidity in global markets. However, the question is why has the investment and deal activity slowed so much? According to the Venture Pulse Q1 2016 report by CB Insights and KPMG, the factors leading to the pause are similar to the jitters that slowed the stock market, including an economic slowdown in China, a drop in oil prices, an anticipated interest-rate increase, and an approaching U.S. presidential election. Also at work are general developments across the globe, not the least of which is the U.K.’s possible exist from the European Union.

Clearly, the VC funds raised will be dispersed over the coming quarters, but investors’ expectations and concerns have changed. Funders are looking for greater transparency — companies with solid balance sheets and business models that can demonstrate profitability, and more importantly, manage their expenses (like those aforementioned ping-pong tables). Unlike the times when investments were based on pure potential, venture capitalists are now scrutinizing start-ups to a greater degree, and funders will become more engaged in companies’ decision-making and spending processes.

Furthermore, the underperformance of some high-profile companies has brought existing and potential unicorns under scrutiny, and investors are recognizing that some valuations are too high. The company that best exemplified the trouble among IPO valuations was Square, which earned a $6 billion valuation in December 2014 but managed only a $4.2 billion valuation in its IPO on November 19, 2015. Today the company’s market cap is at $3.39 billion. And while experts argue that comparing these numbers is like comparing apples and oranges, Square’s high-profile IPO brought attention to the objective valuation of unicorns.

Since then, the recognition that high market valuations may not be warranted is leading to a greater focus on creating revenue and positive growth margins, controlling expenses, and setting a clearer path to profitability. Falling valuations are similarly leading investors to change investment instruments that give them protection and guarantees tied to potential IPOs. For example, Spotify raised funds using convertible debt, which came with strict investor guarantees tied to an anticipated IPO. Also, with unrealized valuations, there has been greater corporate participation and merger-and-acquisition activity instead of IPOs. This trend is likely to continue, as corporations look for new technologies and innovations that they can leverage within their own businesses.

Generally, investors are looking for new opportunities and focusing their attention on technologies that are at the beginning of the innovation cycle. Thus, unlike previous fascinations with consumer Internet companies (Uber and Airbnb, for example), much of the funds raised in the first quarter of 2016 went to the health-care industry. In fact, all 10 IPOS in Q1 2016 were in the health-care sector. Because of two large health-care deals in New York, the industry was the only one in the U.S. that actually saw an uptick in VC activity from the end of 2015. And if the Technology Hype Cycle (Figure 3) developed by research firm Gartner is any indicator of up-and-coming technologies, we may see more investment going into cybersecurity and artificial- intelligence firms. 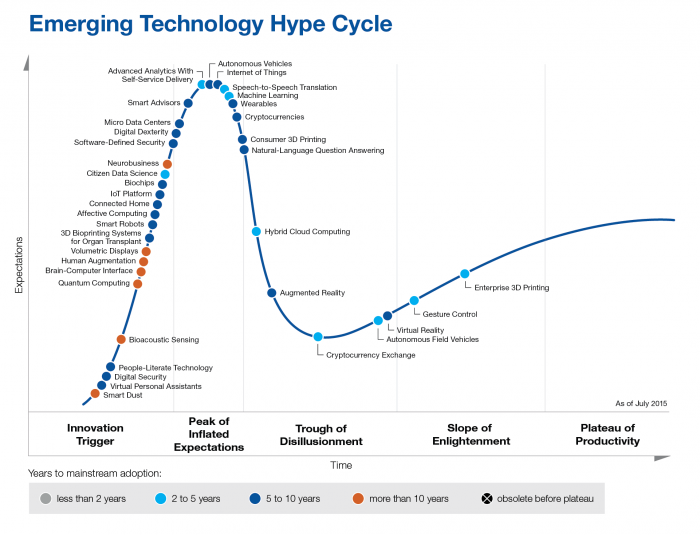 All things considered, while VC market strategies may be shifting, returns in 2015 for the 10-year period were almost twice as high as the Standard & Poor’s (S&P) returns. With the U.S. economy and the S&P market recovering from jitters and a continued strong job market, long-term VC activity still looks encouraging. And as fundraising activity for the beginning of 2016 suggests, there is no shortage of buying interest.

What Does This Mean for Jobs, and Particularly Technology Jobs in the Bay Area?

San Francisco Bay Area job growth has outperformed California’s and the nation’s job growth since the recovery started. While the state’s unemployment rate reached 5.4 percent in March, the lowest level since 2007, most Bay Area regions have unemployment rates well below the state mark, generally ranging between 3 and 4 percent. The latest monthly employment gains came in lower than expected, but the numbers are expected to be revised up based on the number of total employed people.

Overall, the region gained about 118,000 jobs between March 2015 and March 2016. Unsurprisingly, the major employment centers, such as San Francisco and San Jose, accounted for most of those gains, but the composition of the job growth is encouraging.

About 8,300 jobs created between the first quarter of last year and the first quarter of this year were in computer-systems design and related services. While tracking technology jobs can be tricky, as they span across a number of industries, a solid annual gain of 13 percent in computer-systems design suggests that the technology sector in San Francisco is still healthy and strong. Also, it is natural that the pace of job growth moderates as the economy reaches full employment, and with the unemployment rate in San Francisco well below that, some softer numbers may not signal weakening of the local economy.

In Silicon Valley, job growth was relatively more broad-based, but among large industries, electronic computer manufacturing gained jobs at a faster rate than other industries. Again, similar to San Francisco, specialty trade contractors were in high demand and added a considerable number to overall new jobs. Faster job growth was also seen in administrative and support services and publishing, which includes software publishing.

In the greater Oakland region, trends follow the same patterns seen in other parts of the Bay Area. The fastest growth is again among specialty trade contractors, but trending close are jobs in computer-systems design and related services, publishing, and arts and entertainment.

The North Bay saw solid job growth in line with the region’s core competencies, including positions in tourism and food and beverage services. While there may be some growth in tech-related industries, it is still a relatively small number that may not point to any trends yet.

Clear growth in construction jobs across the entire region is welcome, as it points to greater housing construction. Generally, construction jobs have been growing at a relatively speedy pace over the last year. As a share of total employment, the construction sector contributes a much smaller share of jobs than it did during the mid-2000s housing boom.

Taken together, the trends outlined above suggest that technology employment is still robust and that job growth will continue. Another indicator that supports future tech employment growth is the number of job openings. According to an analysis of employment website Indeed.com, the San Jose metro area has the highest number of job openings per capita in the country. What is proving more difficult is finding the appropriate skill set and the right candidate for those open positions. Lastly, the anticipated increase in VC activity will help boost tech employment in general and possibly spur another round of ping-pong table sales.

Selma Hepp is Pacific Union’s Vice President of Business Intelligence. Her previous positions include Chief Economist at Trulia, senior economist for the California Association of Realtors and economist, and manager of public policy and homeownership at the National Association of Realtors. She holds a Master of Arts in Economics from the State University of New York (SUNY), Buffalo and a Ph.D. in Urban and Regional Planning and Design from the University of Maryland.