Northern California home shoppers were undeterred by the wet weather in the final month of the first quarter, with 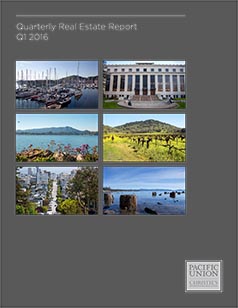 the months’ supply of inventory (MSI) dropping from February to March in every region in which Pacific Union operates. The median sales price in Sonoma County and the East Bay hit a one-year high in March, with prices in the latter climbing ever closer to the $1 million mark.

Pacific Union’s first-quarter 2016 report is packed with data and regional summaries that offer a complete look at real estate activity in the Bay Area and the Lake Tahoe/Truckee region.

Our Q1 Report also includes a comprehensive chart tracking 10 years of home sales throughout the Bay Area and Lake Tahoe/Truckee — 77 cities, towns, and neighborhoods in nine regions. A smaller version of that chart, showing regional totals, appears below. Click anywhere on the chart to see the full data set. 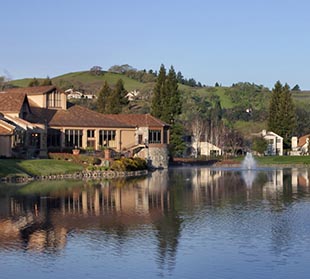 Real estate activity in our Contra Costa County region showed further signs of normalization in the first quarter, with the average sales price holding steady from the fourth quarter of 2015 and inventory growing by nearly 50 percent. Those extra homes for sale meant that competition was less fierce than in previous quarters and that the market is gradually shifting in favor of buyers.

Another indicator that sellers are no longer in the driver’s seat is that the average Contra Costa County home sold for just less than list price in the first quarter, as multiple-offer situations are becoming less common. In general, buyers were more cautious, the result of stock-market jitters and uncertainty over the upcoming presidential election. Many older homeowners traded large homes for smaller properties or left California entirely, giving those who have been shut out of the market more properties to choose from.

Looking Forward: With the arrival of spring, even more inventory will hit the market as sellers take advantage of this traditionally busy real estate season. We expect prices to level off as market conditions balance, though demand should remain solid thanks to a thriving job market and low interest rates. 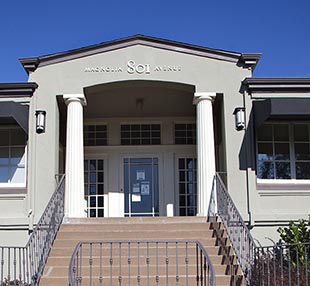 East Bay home hunters continued to heavily outnumber sellers in the first quarter of 2016, and the inventory that did come to market usually vanished in less than two weeks. The result was the same sort of bidding wars that have been prevalent over the past couple of years, with well-priced homes in desirable neighborhoods – those in highly walkable locations near BART – seeing the most demand. Homes in the $800,000 to $1 million price point were also popular with buyers.

Even strong El Niño storms didn’t keep home shoppers from venturing out in droves; on one of the rainiest weekends in March, a home in Oakland’s highly desirable Montclair neighborhood attracted more than 70 eager open-house visitors. Because East Bay buyers will most likely have competition for any attractive home in good condition, we advise hopeful homeowners to come right out of the gate with their best bid.

Looking Forward: With the coming of spring, we anticipate that more East Bay sellers will take advantage of the market and list their homes, providing some relief to buyers who have been frustrated with the low inventory conditions of the past few years. As long as the job market remains favorable, we don’t anticipate demand slowing much through the rest of the year. 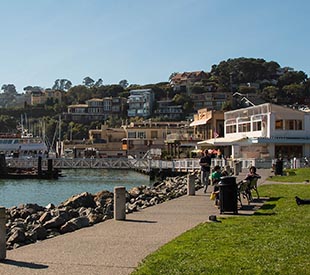 The first quarter of 2016 followed typical seasonal patterns in Marin County, with a slow January and February, mostly due to a lack of homes on the market rather than diminishing buyer demand. Inventory began to increase in March, though El Niño storms put more of a damper on activity than usual. Continued inventory constraints are evidenced by the fact that listings were down from the first quarter of last year by about 10 percent.

Mill Valley, Kentfield, Ross, and Tiburon remain highly coveted communities, and there is no shortage of buyers that can afford to pay all cash for homes. Properties priced from $1 million to $1.5 million were most popular with buyers, with many homes in this range garnering multiple offers.

Looking Forward: As the skies clear and spring arrives, expect an influx of new listings to flood Marin County. As in past years, we project that activity will remain vigorous through the second quarter before slowing in the summer, when both buyers and sellers turn to thoughts of vacations instead of real estate. 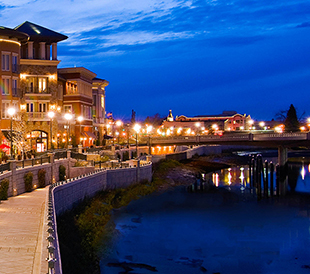 Real estate activity in the first quarter of 2016 looked remarkably similar to the same period last year in Napa County. January and February were typically slow, with sales picking up in March despite strong El Niño storms. Although inventory was tighter than in past quarters, the market appears to be balancing, with sellers not having the same advantage as they do in other parts of the Bay Area.

As such, bidding wars have cooled down. Properties in the $400,000-to-$500,000 range sometimes attracted multiple offers, but only if they were priced correctly and in prime condition. Unlike in other parts of the region, contingencies are still very much a fact of life in Napa County, as sellers attempt to stay in the current home while they search for their next one.

Looking Forward: We expect more owners to list their properties in the second quarter, as spring blooms give Napa County homes an extra splash of curb appeal. Larger estates in the northern part of the county will hit the market in April and May, typically one of the busiest times of the year for real estate. 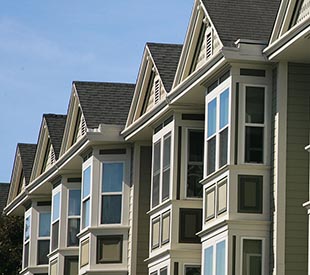 While the San Francisco real estate market remains tilted in favor of sellers, conditions continued to normalize in the first quarter of 2016. Condominiums, for instance, received fewer multiple offers than in quarters past, particularly those at the high end of the market. We also noticed that buyers were entering negotiations with higher expectations; a home not priced properly or one that needed extensive repairs was likely to sit on the market for a while before selling.

Attractive single-family homes priced less than $2 million, however, sold rapidly, while sales in the $2 million to $3 million range began to cool as the quarter wound down. Although a lack of inventory still plagues San Francisco, we did see some relief in the form of more condominium listings. Young, affluent tech workers competing for limited housing continued to push prices up, particularly for entry-level condos.

Looking Forward: Home stagers and inspectors were almost fully booked by the end of the first quarter, a sure sign that sellers are preparing to list their properties in the traditionally busy spring season. We expect that a strong local economy and historically low interest rates will combine for a healthy 2016 for San Francisco’s real estate market.

The first quarter began sluggish in our Silicon Valley region, with a slower than average January and February. But as the rain fell in March, the real estate floodgates opened, and sales volume surged, compensating for the first two months. Multiple offers were common for well-priced properties in attractive neighborhoods, though some buyers are sitting out, perhaps spooked by the stock market, as well as layoffs at local tech companies and rumors of more downsizing to come.

Even with more inventory, prices don’t appear likely to top out this year due to continued strong demand. As has been the case for the past couple of years, nearly one-third of homes sold in Silicon Valley in the first quarter never hit the MLS, which helps sellers retain their privacy but doesn’t guarantee they will get the best possible price.

Looking Forward: Based on March’s bustling sales pace, we predict another healthy spring season, traditionally one of the busiest times for real estate. Prices should continue to rise until the middle of summer, and hopefully local sellers will take advantage of the opportune environment.

Defining the Mid-Peninsula: Our real estate markets in the Mid-Peninsula subregion include the cities of Burlingame (excluding Ingold Millsdale Industrial Center), Hillsborough, and San Mateo (excluding the North Shoreview/Dore Cavanaugh area). Sales statistics in the report charts includes all single-family homes in these communities. 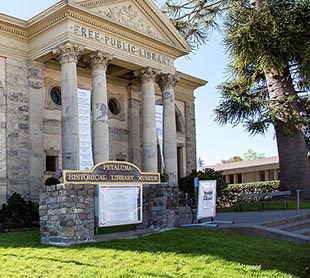 The first quarter saw median home prices in Sonoma County climb to just over the $550,000 ceiling of 2015. Buyer demand remained intense, with multiple offers on most attractively priced homes up to the $1.5 million price point. In some high-end markets like Healdsburg, buyers appeared hesitant and resistant to prices in the early part of the quarter, possibly spooked by fears of a tech-sector fallout and global economic concerns. But by March that sentiment had settled down, and buyers seemed more willing to cut checks.

Single-story homes and those with in-law units were especially popular with buyers throughout Sonoma County, and most well-priced properties quickly went into contract. New inventory was scarce, compounded by the fact that 15 to 20 percent of transactions occurred off the MLS. Such off-market deals may save sellers the hassle of showing a crowd of buyers their home, and entertaining multiple bids, but they don’t always guarantee the highest price.

Looking Forward: As buyers appear to have put economic concerns in the rearview mirror, we expect demand to pick up even more in the spring. More listings hit the market by the end of the first quarter, which should translate into a healthy second quarter. 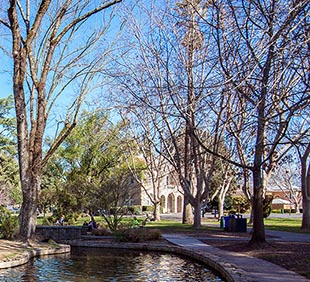 There was no shortage of buyers in Sonoma Valley early in the first quarter, but there were very few properties on the market for them to choose from.  When new listings hit the market, they were likely to be in contract the following day – particularly true for homes priced less than $1 million.  Buyers were active despite the rainy weather, and by the end of the quarter, new listings poured in.  As usual, many sellers waited for the beginning of spring to list their homes and found themselves in competition with other sellers using the same strategy.

Prices appeared to begin stabilizing, as the run-up over the past couple of years has taken its toll on buyers.  Although interest rates and other economic indicators are still mostly positive, the volatility of the stock market during the first quarter may have cooled some buyers’ interest.  But clearly others believe that real estate is a more secure investment than stocks and made their move.

Looking Forward: The second quarter may prove to be the greatest indicator of activity for the rest of the year.  If inventory continues to rise and prices normalize, we may see a more balanced market than we have seen for a while. Second-home and vacation-home sales have a substantial impact on Sonoma Valley real estate, and discretionary income will continue to play a part in overall market health.

Defining Sonoma Valley: Our real estate markets in Sonoma Valley include the cities of Glen Ellen, Kenwood, and Sonoma. Sales statistics in the report charts refers to all residential properties – including single-family homes, condominiums, and farms and ranches – in these communities. 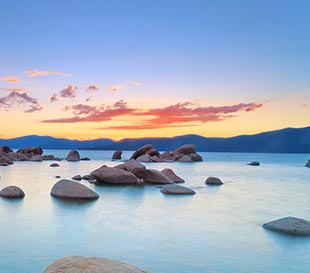 The return of snow to the Sierra Nevadas brought visitors flocking to the Lake/Tahoe Truckee region in the first quarter and boosted home sales volume substantially. Inventory was tight in January and February before more homes hit the market in March. The average sales price for properties still hasn’t fully rebounded from its peak a decade ago, giving savvy buyers plenty of opportunity to score a bargain, particularly given that interest rates remain low.

On average, homes sold for a few percentage points less than list price, and bidding wars were uncommon. Sellers needed to price their properties exactly right in order to ensure a speedy sale; those priced unrealistically high tended to languish on the market for months. The Lake Tahoe real estate market depends heavily on second-home buyers from the Bay Area, and continued economic prosperity should continue to drive home sales this year.

Looking Forward: As El Niño fades and the snow melts, we expect more homes to come on the market in the second quarter. That added inventory should spur an uptick in sales, as buyers take advantage of favorable market conditions to secure a vacation getaway.