As Californians come to terms with the severe drought conditions across the state, a dust-up has surfaced over water policies — specifically, the merits (if any) of installing a pool as a water-saving alternative to watering the lawn. 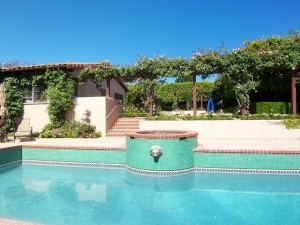 It’s a debate that homeowners and homebuyers need to follow, because water-use regulations may play a big role in determining property values in the coming months, and perhaps years.

Case in point: The California Pool and Spa Association is currently lobbying water districts across the state to back off from proposed bans on filling pools and spas. Some cities, such as San Jose, already have such bans in place. Instead, the pool industry says a standard-sized pool uses one-third the amount of water as an irrigated lawn.

“We’re not saying, ‘Solve the drought, put in a pool,’ but the bottom line is people who put in a pool are making a decision to do something more water efficient with their backyard. They’re saving water,” John Norwood, president of the California Pool and Spa Association, recently told the Associated Press. “Pools are landscaping.”

Water-conservation experts question the pool industry’s numbers, saying that residential pools and lawns use roughly the same amount of water. And neither option is an optimal choice during a drought.

“These are luxuries, and we’re in a really bad drought and everybody needs to step up instead of pointing the finger at the other guy,” Peter Gleick, president of the Oakland-based Pacific Institute, an environmental research group, said in the AP story.

Water conservation will grow in importance as the drought continues. Pacific Union has posted several stories in recent months about water-conservation options for homeowners and buyers, including tips on drought-tolerant landscaping and new interest in artifical grass. Look for additional articles in the coming months.