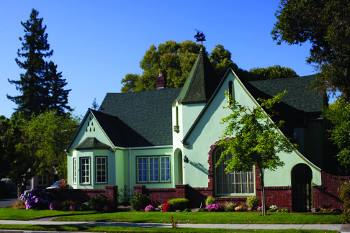 A home in Napa County.

Housing affordability increased in California and the nine-county Bay Area in the first three months of 2015, with Napa County putting up the largest quarterly gain in the state.

In its Q1 Affordability Report, the California Association of Realtors (CAR) says that 34 percent of Golden State residents could afford to purchase a single-family home, up from 31 percent in the fourth quarter of 2014 and 33 percent one year ago. The average Californian needs to pull in $87,700 per year to afford the median-priced $442,430 home, assuming a 20 percent down payment and a 30-year mortgage using an interest rate of 3.97 percent.

According to CAR, the uptick in affordability across the state is the result of low interest rates and normalizing home prices. Housing affordability is now at its highest level in nearly two years but still well short of its peak in the first quarter of 2012, when 56 percent of Californians could afford a home.

Across the nine-county Bay Area, 23 percent of residents could afford to purchase a home, up from 21 percent in the fourth quarter and unchanged from the first quarter of 2014. In order to afford the median-priced $748,330 home, locals must earn $148,330 per year and can expect to pay $3,710 in monthly mortgage payments (including taxes and insurance).

Napa County saw the largest quarterly affordability improvements in the state, up from 24 percent in the fourth quarter to 34 percent in the first quarter. Marin County also experienced a decent uptick in quarter-over-quarter affordability, from 15 percent to 19 percent. Besides low interest rates and leveling prices, CAR says that the affordability gains in those two counties are largely due to households earning larger incomes.

Across the rest of the Bay Area, affordability improved from the fourth quarter in Alameda, Sonoma, and San Francisco counties while remaining static in Santa Clara County. Affordability declined in Contra Costa, San Mateo, and Solano counties.

Even with the slight gain, San Francisco remains California’s toughest county for buyers, with only 12 percent of residents able to afford a home. San Mateo County was the state’s second-least affordable county, with 14 percent of the population able to buy.

San Mateo was also the state’s most expensive county in which to purchase a home in the first quarter, with the median sales price at $1,202,000. San Francisco and Marin counties were the only others in California where the median sales price was in the seven-figure range — $1,175, 850 and $1,036,050, respectively. Those three counties were also the only ones in California where residents need a minimum qualifying income in excess of $200,000 to purchase a home and can expect to shell out more than $5,000 in monthly mortgage payments.