Not far from Sonoma County’s two largest cities but a world apart from the bustle of the Bay Area, the laid-back coastal community of Bodega Bay is steeped in the natural beauty that has long drawn people to Northern California — one reason that home prices have seen sizable gains over the past two years. 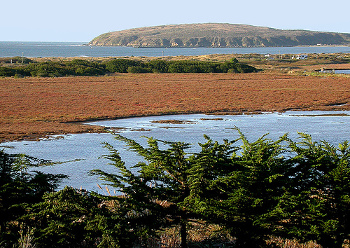 Located off Highway 1, the community of about 1,100 residents lies roughly 25 miles southwest of Santa Rosa and 30 miles northwest of Petaluma. Bodega Bay’s small central village area and some of its homes surround Bodega Harbor, a shallow body of water protected from the Pacific Ocean by Dorian Regional Park.

Residents don’t have to look far for spectacular scenery and opportunities for outdoor recreation. Just to the north is Sonoma Coast State Park, a 17-mile stretch of rugged, rocky coastline that is home to some of Northern California’s most gorgeous and pristine beaches. Locals and visitors alike enjoy teeing off at The Links at Bodega Harbour, an 18-hole golf course designed by noted architect Robert Trent Jones Jr.

Bodega Bay is a short drive from the mouth of the Russian River, a popular spot for swimming, kayaking, and boating during the warm summer months. State Route 116 follows the river inland, winding through towering redwood groves, the quirky community of Guerneville, and the wineries of the Russian River Valley.

Director Alfred Hitchcock, who frequently shot films in Northern California, chose Bodega Bay as the primary setting for his 1963 thriller “The Birds.” Several landmarks from the film still stand, including the Potter Schoolhouse, which appeared in one of the movie’s most famous scenes. Other scenes were filmed at The Tides Wharf Restaurant & Bar and in the surrounding Sonoma County countryside. The Bay View Restaurant pays homage to the master of suspense with a dish it calls the Filetto Hitchock — a filet mignon with Dungeness crab — while the Sonoma Coast Visitors Center provides a map of “The Birds” filming locations.

Bodega Bay has a handful of other restaurants and mom-and-pop businesses, including several markets, a surf shop, and a store that sells the unlikely combination of candy and kites. Most local restaurants specialize in seafood, and the community has several dedicated fish markets where residents can buy fresh catches.

Homes close to the community’s central district include modest, older bungalows as well as more modern properties. Homes in the luxury Bodega Harbour neighborhood, which surrounds the golf course, offer commanding views of the Pacific Ocean and are governed by a homeowners’ association, which also operates the local yacht club.

Demand for Northern California coastal real estate and a scarcity of available homes have helped fuel price growth in Bodega Bay over the past couple of years. According to MLS data, the median sales price for a single-family home in Bodega Bay was $960,000 in April, up 37 percent from a year earlier and 72 percent from April 2013.