The Golden State was responsible for a sizable share of the country’s new jobs last month and continues to outpace the nation in terms of employment growth. 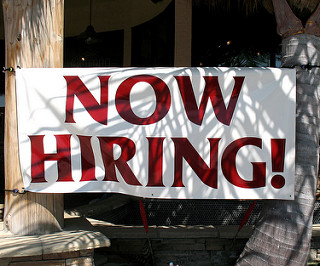 In its latest jobs report, the California Employment Development Department says that the state added 59,600 positions in April after a slow March in which only 4,200 new jobs were created. The state’s robust job growth accounted for more than one-third of the 160,000 positions created across the U.S. last month.

According to a separate report from Palo Alto-based Center For Continuing Study of the California Economy, the state has added 450,000 jobs over the past year for a growth rate of 2.8 percent, compared with 1.9 percent growth nationwide. California continued to close the gap between the U.S. unemployment rate, with jobless claims falling to 5.3 percent on a seasonally adjusted basis, the lowest since June 2007. U.S. Department of Labor statistics put the national unemployment rate at 5.0 in April, unchanged from March.

The Bay Area’s high-octane economy continued its run in April, with jobless claims dropping in all nine counties month over month. San Mateo County again had the state’s lowest unemployment rate — 2.9 percent on a nonseasonally adjusted basis. According to the EDD’s historic employment data, the last time unemployment dropped below 3 percent in the county was February 2001, just before the dot-com bubble popped.

In the East Bay, jobless claims dropped to 4.1 percent in Alameda County and 4.3 percent in Contra Costa County. Solano County’s unemployment rate fell to 5.3 percent, putting it in line with the statewide average.

In a recent analysis of the Bay Area’s economy, Pacific Union Vice President of Business Intelligence and Chief Economist Selma Hepp wrote that the Bay Area added 118,000 jobs between March 2015 and March 2016. The region is following statewide trends, with the largest job gains in the high-tech and construction sectors. Hepp expects economic growth throughout the region to continue, pointing to the fact that the San Jose metro area has the largest number of job openings in the country.

“I’m very encouraged by the latest job-growth numbers, especially in light of recent fears around a tech-employment downturn,” Hepp says. “April’s numbers showed 13,100 new jobs were added from the month before in the Bay Area, and most of those jobs are in the tech and construction industries. Strong employment growth suggests pressures on the housing market will continue, and 2016 will be another solid year for the Bay Area, with lingering concerns over a lack of homes for sale and especially those in affordable price ranges”