Like in previous months, more than half of the nation’s most in-demand real estate markets are located in California as December comes to a close, with Bay Area cities claiming the top three spots. 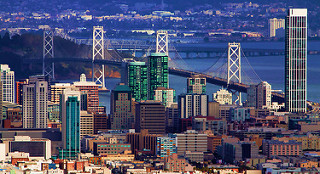 In a recurring monthly analysis, Realtor.com names the 20 hottest housing markets in the U.S. based on listing views on its website and where homes are selling the fastest. Eleven of those hot markets can be found in California, based on data from the first three weeks of December, and Golden State real estate should continue to command plenty of interest in the coming year.

Realtor.com says that homes in cities on its hot list sell 29 to 51 days faster than the nationwide average of 93 days. Combined, these markets have seen average days on the market decline by 15 percent on an annual basis.

The Bay Area’s largest two real estate markets are moving nearly twice as fast as the rest of the country, with homes selling in 47 days in San Jose and 49 days in San Francisco. In the Central Valley, where demand for homes is growing as more buyers head inland to score bargains, the pace of sales is even quicker: 42 days in Stockton, 43 days in Modesto, and 44 days in Sacramento.