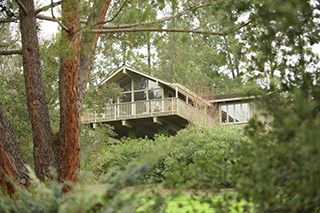 A home in the San Mateo County town of Portola Valley, ranked as the most affluent community in America.

Silicon Valley communities are again making news for their high levels of wealth and education, accounting for four of the five most affluent communities in America.

That’s according to a recent analysis by real estate search engine FindTheHome, which ranked the 20 richest cities in the nation by per capita income from the U.S. Census Bureau’s American Community Survey. The study also examined education levels in these communities, as that ties closely with affluence — and real estate prices.

In total, seven Bay Area communities, all with populations of less than 12,000, count among the wealthiest in the U.S. Here’s a quick look at how they rank, along with recent single-family home sales statistics according to MLS data as of Feb. 8.

No. 20 — Piedmont: With an average per capita income of $101,794, 84 percent of residents in this Alameda County city have a bachelor’s degree or higher. In January, just one home sold in Piedmont, for $1.76 million.

No. 13 — Kentfield: The average resident of this Marin County community earns $109,976 per year, and 76.5 percent have college degrees. Only one home sold in Kentfield last month, fetching $1.575 million and selling in a brisk seven days.

No. 7 — Los Altos Hills: Residents of this Santa Clara County town pull in an average of $123,127 each year, with 83 percent having bachelor’s degrees. Three Los Altos Hills homes sold in January, with the median sales price at $4.175 million, up 23 percent from one year ago.

No. 5 — Woodside: Although Woodside has a lower rate of higher education — 69 percent — than the Bay Area’s other richest enclaves, its residents earn annual incomes of $125,559. A single home changed hands in the San Mateo County town in January, selling for $4 million.

No. 4 — Hillsborough: The average per capita income in Hillsborough is $127,868, and 76 percent of residents have at least a bachelor’s degree. Four homes sold in January, with the median sales price at $3.65 million, exactly what it was one year ago.

No. 2 — Atherton: Forbes named Atherton as America’s wealthiest community on its 2015 list of richest ZIP codes, which ranks places by median home price. But by income, this tony town comes in second, with the average resident earning $144,197 per year and 83 percent holding college degrees. Two Atherton homes sold last month, and the median sales price was $4.29 million.

No. 1 — Portola Valley: With an average per capita income of $152,128, Santa Mateo County’s Portola Valley is America’s wealthiest community. Seventy-nine percent of Portola Valley residents are educated. Three homes in the town sold in January, with the median sales price at $2.7 million.