Although California unemployment claims ticked up slightly in the final month of 2015, job growth was solid, foreshadowing what will hopefully be another a bright year ahead for the state’s labor market and housing market. 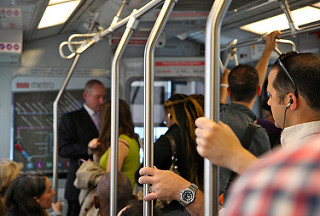 According to the latest numbers from the California Employment Development Department, the Golden State added 60,400 jobs in December, up from the revised 7,200 new jobs in November. Statewide, the unemployment rate inched up to 5.8 percent on a nonseasonally adusted basis, higher than the national average, 5.0 percent. In a separate report commenting on the data, Stephen Levy, director of the Center For Continuing Study of the California Economy, noted that since the recession ended, the state has grown jobs by 15.3 percent, compared with 10.5 percent job growth recorded nationwide.

Over the past year, employment in California has grown by 2.9 percent, double the U.S. rate. Since December of last year the professional and business service sector has added the most jobs — nearly 125,000 — and such positions tend to command high wages. Still, Levy noted that in some sectors and occupations, real wages are still below what they were in 2007.

Bay Area job levels are now 11.6 percent above their prerecession peaks, more than any other region of the state. Month over month, unemployment rates dropped slightly in Alameda, Contra Costa, Marin, San Francisco, and Santa Clara counties; inched up in Napa County; and remained unchanged in San Mateo, Solano, and Sonoma counties.

Looking forward, Bay Area job growth should continue for the next few years before beginning to taper off, according to Pacific Union’s nine exclusive regional Real Estate and Economic Outlooks, published earlier this month and prepared by analysts at John Burns Real Estate Consulting. Levy notes that last week, California Gov. Jerry Brown addressed steps necessary to prepare the state for the next recession.